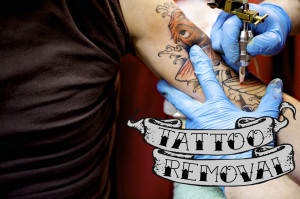 It is estimated that 1 in 7 North Americans have a tattoo. Of those individuals, 1 in 5 have reported having tattoos that they would like removed.

Despite the abundance of products on the market claiming to offer tattoo removal, lasers are the only effective method of removing a tattoo without causing permanent damage to the skin. Aggressive techniques like salabrasion tattoo removal, the process of removing unwanted ink via dermabrasion with granular salt and water, is often ineffective with a high risk of scarring and infection. Bleaching creams have also shown to be ineffective, and ultimately make removal with lasers more difficult.

What is Laser Tattoo Removal?

Laser tattoo removal refers to the process of using a laser with a wavelength capable of targeting the ink particle in a tattoo. The body then absorbs these broken up ink particles, resulting in fading. Over time and with multiple treatments, tattoos can often be completely removed from the body.

Q-Switched lasers are the most common lasers used in tattoo removal. Their energy is delivered in nanoseconds and is effective on a large spectrum of colors.

Until the launch of PicoSure, Q-Switched lasers had been considered the gold standard for removing tattoos. Q-switched laser treatments use thermal energy to heat up and break apart the ink particles. Now with PicoSure, ultra-short pulses (one trillionth of a second in length!) hit the ink particle with a pressure so great, the ink shatters into tiny dust-like particles. Because the particles are so small, they are more readily absorbed and eliminated by the body. This can mean better clearance of the tattoo and less treatments overall!

For more information on laser tattoo removal with the PicoSure machine, please submit an inquiry via our contact form. All consultations are complimentary. Please note that all appointments require advanced booking.